Des(p)ierto, written in the summer of 2007 on the Mediterranean coast.
The name comes from a state of mind, in which an emotional desert helped me to wake up.

I. Gale (section A). On the strings. A gale implies a lot of movement.

II. Jaima (section B). A blow that gives rise to a percussive part. The jaima from the outside may imply stillness, but inside it could develop from the deepest sleep to the liveliest party.

III. Dunes (section C). melodic part with scale 2-1-3-1-2-2-2-1. The dunes are constantly moving, waxing and waning as the wind transports their grains of sand. Section C has melody and texture taken mostly from my work “Francisco de Asís”, which I finished a few days before the composition of Des(p)ierto.

IV. Storm (sort of section A’). To finish, a somewhat different timbre from the beginning. The storm is similar to the gale, but more resounding. The gale and the storm make the dunes move, at the same time that the stimuli on the strings (sections I and IV) make the strings sound (section III).

The pieve was a request of my German-Argentinean teacher Juan María Solare for his doctoral thesis on creative processes. It was premiered by Mauricio López, pianist of the Ensemble Kagel für Neues Musiktheater at the University of Bremen (Germany) in June 2009. 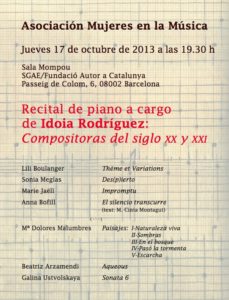